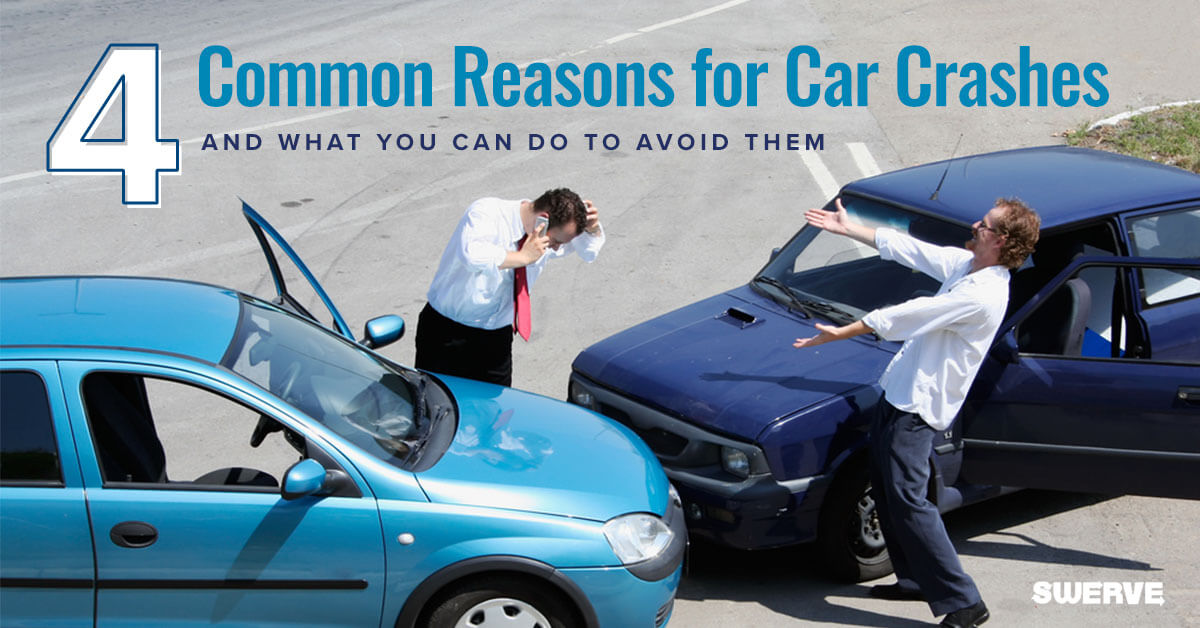 One of the top reasons for car crashes in the United States is from drivers not paying attention to the road. Some of the most common reasons people are distracted are:

Not paying attention to the road for even a few seconds can lead to a collision. Depending on the speed, a car can travel up to several hundred feet in just seconds and each of these takes the driver’s attention away from the road.

Put your phones and devices away, don’t get so involved with anything that takes your attention away from the road, and pull off the road if you need to accomplish any of the listed tasks.

Being impaired means being weakened or damaged in, or having some sort of disability. When applied to driving, this comes in a few different forms, including driving while drunk or under the influence of drugs and medication that decrease your ability to function in a normal way. Driving when you are overly tired is another form of impairment.

If you are driving under any of these circumstances, you are not capable of driving a car responsibly. Your thinking and reasoning skills are slower, vision is compromised, and reaction times are much worse. Car crashes are often a result of driving impaired and come with heavy consequences, including jail time and a revoked driver’s license.

Never get behind the wheel of a car if you’ve been drinking or doing drugs. Check all medication warnings carefully and pay attention to how you feel before attempting to drive. If you know that you will be in a situation where your driving abilities will be impaired, arrange for someone else to drive. If you are feeling too tired, pull off the road and take a nap or switch drivers. Never take a chance or reason that you’re good enough to drive.

Too often, people are driving while in a hurry, going too fast. All it takes is getting cut off, hitting black ice, or trying to run a red light to cause a collision. Police can determine how fast a vehicle was going in a crash based on the tire’s skid marks on the road and the severity of the damage to another vehicle. It is harder to stop a car that is going fast, but it also has more force behind it when the crash happens.

Pay careful attention to how fast you are driving. Do your best to not feel rushed while driving by giving yourself plenty of time to reach your destination. Don’t race other cars.

The last common reason for car crashes is because drivers get too aggressive with another driver on the road. When someone gets cut off or becomes impatient with a slower driver, sometimes they can’t let it go and get aggressive by trying to get some sort of payback.

These aggressive movements put everyone around them at risk and often result in dangerous situations, including a car crash.

Keep your cool when driving. Don’t overreact when someone does a stupid move in traffic. Instead, try to be patient and assume it was unintentional. If someone is getting aggressive with you, call the police. Don’t try and handle it yourself or add more aggressive behavior. 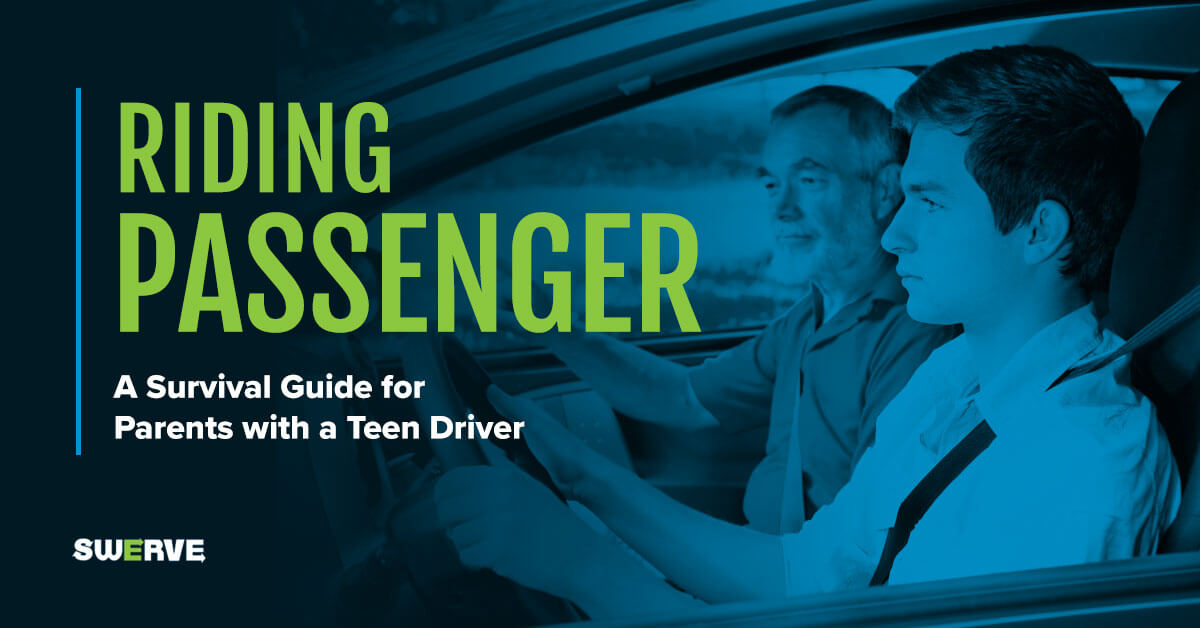 Most states require a licensed driver or parent to ride passenger with their student driver for a certain number of hours. This helps the student to get practice on the road with some responsible supervision. If you are a parent, you will spend many of these hours in the car with your student, so here is a little survival guide for you.

The last thing you want to do for your new driver is to scare them (or you as the parent) too much. Even if your driver feels ready to jump right into busy roads, it’s not a good idea. Start working on basics in a parking lot and move to neighborhood streets. After a bit of practice, try moving to slightly busier roads. Stick to familiar roads for the both of you. That way, you can know what to expect. As your teenager becomes more experienced, move to busy roads and eventually the freeway.

When you are out driving together, have your teen explain what they see. Some examples might be “we are approaching a stop light that is turning yellow, I’m preparing to stop”, “a child on a bike is coming up to the crosswalk, I’m going to slow down”, or “the car in front of me is braking, I’m slowing down”. While it won’t help you completely relax, it can help remove tension knowing that they are paying attention to their surroundings. It also provides opportunities for you to teach your teen what they should be watching for while driving.

3. Put your phone to use

Part of the reason you come along is to help teach your teen, right? If you have your phone handy, you can test their restraint by texting them every so often to see if they stay focused on the road. Use this as a teaching moment by giving positive reinforcement if they choose not to use it while driving. If they reach for their phone, remind them how important it is to not use their phones even at stop signs and red lights. They should pull off the road and out of traffic if they need to use their phone.

Bumper stickers and/or magnets that say “Caution: New Driver” or “Student Driver, please be patient” are available to purchase online and in some local stores. You can also make your own using some paper and a magic marker. This helps other drivers be aware that your teen is still learning, and they should be patient and give them a little extra space.

Behind every great driver is a parent who put in the hours and sweat to teach them. Make sure you buy yourself a reward, even if it’s a pack of gold stickers. It’s a big accomplishment for your teenager to get their driver’s license, but it’s also a big step for you too. Driver’s education teachers rely on parents to reinforce what students learn in class. These parent survival tips will help you be prepared for some common situations to experience together. 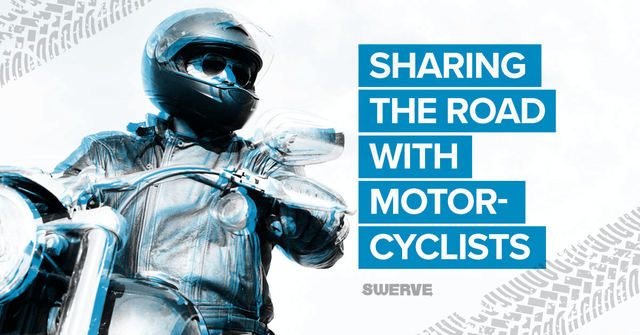 May is motorcycle awareness month, so we thought it was a good time to review safety tips for both motorcyclists and drivers of regular vehicles too. Since both are responsible for keeping everyone safe, here are eight tips for all drivers.

Cars and motorcycles all come equipped with rearview mirrors. While they make driving easier, they don’t give you a complete picture behind and around your car. Motorcycles fit into blind spots easier and make it harder to spot them. Whether you’re driving a motorcycle or driving a vehicle, make sure you are always aware of your surroundings by checking your blind spots and being aware when you’re in someone else’s.

Motorcycles have a faster reaction time

Cars are bigger and slower to maneuver. Motorcyclists only tilt slightly to change a lane and can go in and out of traffic easier. This makes it more hazardous for drivers who aren’t paying attention.

Wet roads and windy conditions are only a slight annoyance to a vehicle, but potentially hazardous to a motorcyclist. When the weather isn’t sunny and beautiful, everyone should slow down. Motorcyclists must go around puddles and ice, so make sure that you give them room in bad conditions.

It is harder for all drivers to see at night, but it is even harder to see motorcycles on the road. Avoid driving a motorcycle in the dark and be watch carefully for motorcyclists when changing lanes in a vehicle.

All drivers should signal before changing lanes or turning. To be extra safe, make sure you are signaling for a decent amount of time so it is clear to others what you’re doing. Be aware of what hand signals are used for different turns as well.

Road rage is dangerous for all drivers, but it can be fatal for motorcyclists. Don’t tailgate, swerve at, or try to cut off motorcyclists and avoid this behavior is you are the one on the motorcycle too. One bad move could throw the driver off their bike, seriously hurting or killing them.

When you approach an intersection, it’s important to be very aware of all the lanes of traffic. Left turns seem to be particularly dangerous for motorcycle drivers because they are hard to see and easy to hit. No matter which way you are turning, look around and make sure you know who is turning and the direction they are moving so that you can all stay safe.

Don’t drive under the influence of anything

Numerous public campaigns have run for decades trying to make everyone aware of how dangerous drunk driving is for society. If you are impaired from any substance, reactions are slowed, behavior is erratic, and decision-making skills are compromised.

This makes it harder to drive around a motorcycle with different maneuvers than a normal vehicle. If you are driving a motorcycle, driving while impaired is even more dangerous because one small jerk or swerve can have terrible consequences. Stay safe and stay alert.